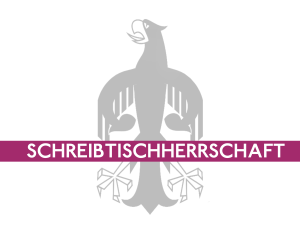 Bureaucracy: For some, a vast clutter of rules and regulations; for others, the greatest achievement in the history of systems of government. “Desk-ocracy” explores the pros and cons of bureaucracy, relying exclusively on government forms and legal texts in order to deconstruct the language and structure of bureaucracy.

This production is a joint project of Uniater e. V., the artist collective FRITZAHOI! and the Berlin-based band Queen Sacrifice and celebrated its premiere on September 23rd 2016, as part of the one-year anniversary of the art and creative house Rechenzentrum. Further performances were on September 24th and 25th at 7:30pm. It was also show on December 9, 2016 in the context of the international conference “Fictions of Management” of the Kennedy Institute of the FU Berlin.