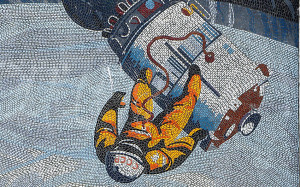 On July 8 2016, the Uniater ensemble invited the public to its workshop presentation of “Men in Space” in the art and creative center Rechenzentrum and gave a first preview of their theatre series of the same name, which will be shown in Potsdam from March 2017  and is based on the novel by Tom McCarthy. The Berlin-based band Vizediktator provided musical support for the scenery.