Second episode of the theatre series Men in Space

“Labyrinth”, the second episode of the theatre series “Men in Space”, focuses on Bulgarian Anton Markov, who lives in Prague with his wife Helena. His goal is to emigrate to the USA with his wife and her children, who are still being held in Bulgaria. To achieve this goal, the academic reluctantly works for the Bulgarian Mafia, which has found shelter in Prague and wants to sell an old icon to America. The paternal leader of the mafia is Constantin Ilievski, who sees his foster son in Anton Markov. For Ilievski, Anton had made contact with the Czech painter Ivan Maňásek, who was to make a faithful copy of the painting and who, after completing this order, fell out of the window of his studio under mysterious circumstances. During a raid, the Czech police find the two icons in Anton Markov’s apartment and take them away… 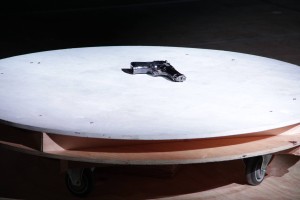 In his novel of the same name, which forms the basis of the theatre series, Tom McCarthy paints a multi-faceted picture of developments in Eastern Europe following the collapse of the Soviet Union. Episodically, from the perspectives of the art scene, the mafia and a Czech agent, he tells the story of a dubious icon that does not seem to bring any luck to its owners.

The Uniater e. V. ensemble is developing an art thriller based on the novel’s plot, which in its second part “Labyrinth” shows the events from the perspective of the Bulgarian mafia in Prague. The third part, planned for 2020, will describe the events from the point of view of the agent who supervises and documents all that’s happening. Each episode of this theatre series stands on its own and yet the three episodes reference each other and in the end form a greater whole.