Art | Friendship | Surveillance | A dubious deal for an icon
The Uniater e. V. presents the first episode of the new theatre series “Men in Space”.

On 2nd, 3rd and 4th of June 2017, the Ensemble of the Uniater e. V. will present the world premiere of “MEN IN SPACE – ICARUS”, the first of three episodes of the new theatre series at the Treffpunkt Freizeit in Potsdam 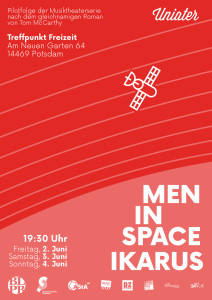 The focus of the episode is on the young painter Ivan Maňasek and his circle of friends, the Prague art bohemians of the early 1990s, in the period after the Velvet Revolution. Ivan Maňasek was commissioned by the Bulgarian mafia to copy an icon that was to be sold past Interpol to the USA. While Ivan passionately throws himself into his artistic work, he does not realize that his friends and himself have long been under the observation of the Czech state police.
Tom McCarthy’s novel “Men in Space”, which is the basis for the new theatre series, tells the story of a dubious icon, which does not seem to bring happiness to its owners, from the perspectives of the art scene, the mafia and a Czech agent. He paints a multi-faceted picture of developments in Eastern Europe after the collapse of the Soviet Union.